Museum Expansion - what do you think?

Now that we've celebrated our 30th anniversary, we are ready to expand!
We want to hear from you!!!
Please comment and leave your feedback and suggestions.
Posted by beanwebmaster at 9:42 AM 8 comments: 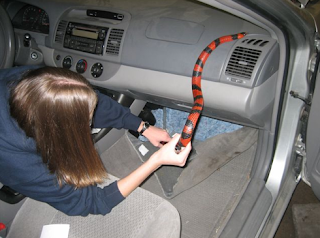 Last Wednesday (April 30, 2008) we took some of the live animals on an outreach. When we got back we discovered that Bandit, the milk snake, was not in his box. This was alarming because 1) Bandit had been in a Tupperware box and the lid was still on it. How did he get out? And 2) if he wasn’t in the box, where was he? Bandit is red and black, about 4 feet long and has the diameter of a quarter. He has been known to escape before, but never from a Tupperware box. After a careful search of the car, Bandit was discovered under the driver’s seat. He had wormed his way into a little hole in the upholstery and was actually underneath the carpet. There was no way to get him out so we just decided to let him be. He would come out when he got hungry or cold enough. This wouldn’t be the first time Bandit had been lost in the car and the last time it had happened he had survived out there for several months. It was only a matter of time.

The next morning I had to take the car on another outreach to Pleasant Grove. I was a little bit nervous about driving with a snake loose in the car, but I got there and back without any sign of him. Upon my arrival back at the museum I was promptly instructed to take the car to the auto repair shop and “get the snake out!” Apparently the rest of the museum staff, who also drive the car, were not so comfortable with the idea of just waiting for what could be months for the snake to come out on his own. We called the auto shop to let them know about the situation and let them know that I was on my way.

When I got to the shop I stepped into the office and announced that I was the girl from the Bean Museum with the snake in the car. This announcement was met with silence and a whole room of blank stares. Finally someone said “You mean you really do have a snake lost in your car?” I answered that, yes, we did. “We thought that was joke!” the secretary said. I assured them that it was no joke, that there was, indeed, a four-foot milk snake lost in the car and that we really would like to find him and get him out. They asked me to wait while they tried to find a mechanic who would be willing to help me. From inside the garage I could hear things like “Are you serious? There is seriously a snake in the car?” and “I am not working on any cars with snakes in them!” But after a few minutes of waiting I was instructed to move the car to the last slot in the garage – as far away from the office as I could get.

Of course, a large group had gathered to watch. It isn’t everyday that the auto shop has to find a lost snake in a car, and nobody was about to miss this. Before we got started I explained that Bandit was a nice, tame snake that doesn’t bite people (unless provoked), that he was not venomous, and that he was probably really cold because temperatures had dropped below freezing the night before. Cold blooded animals, like snakes, can’t move very fast when they are cold, so even if he wanted to strike, he probably wouldn’t be able to move fast enough. I was worried that someone might try to pull the snake out and in so doing hurt the snake. This, as it turned out, was not going to be much of a problem as nobody even wanted to touch him, let alone pick him up. It was decided that I would be the one to grab the snake as soon as he was found, which was fine with me. I assured them that there was nothing to be scared of. I don’t think they really believed me. But we got started.

Bandit had last been seen beneath the carpet in the front seat so I suggested that we start there. We did a thorough search of the car before we started taking the seats and carpet out. Everybody was really nervous and jumpy and we had some false alarms that turned out to be cords and cables. I assured them that they would know Bandit when they saw him. He is bright red and black. We finally got the front seat out of the car and tore the carpet up. No snake. That made everybody a little more nervous. Where had he gone? We started playing the “If you were a snake, where would you be?” game. We knew that he would have gone to the warmest place he could find. I was worried that he had gotten into the engine and that I had “fried” him when I had driven to Pleasant Grove that morning. We popped the hood, but, much to the relief of all, there was no snake. So where was he?

We decided that the warmest place he could have gotten to would be the heating cables that run down from beneath the dashboard between the two front seats. The mechanic started working his way to that while I called the museum to let them know what we had found, or more accurately hadn’t found. While I was on the phone I suddenly heard screaming and saw everybody backing away from the car. I heard somebody yelling “Oh my gosh! There it is! That’s a snake!” I happily let the museum know that we had found Bandit and then I hung up. I don’t know what I was expecting. I guess form all the screaming I thought that they had at least seen the head. But all that was visible was about 2 inches of body. It wasn’t even moving. 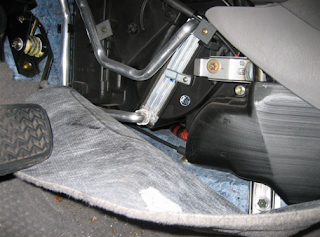 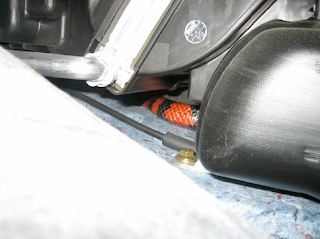 They pointed it out to me and told me to “get it” which, of course, I couldn’t do without risking hurting the snake. I also didn’t know where its head was, so I didn’t want to just grab him and pull without knowing where the rest of him was first. We went at it again from the passenger side. As soon as we got the carpet up I was easily able to pick him up and gently pull him out.
There was more screaming and panicking and almost some swearing, not from me (the only girl among them), but from these big, strong, manly mechanics. I was just happy to see Bandit alive and well. He was pretty cold and immediately tried to slither up my sleeve for warmth. But once he calmed down a little bit, he was fine. I called the museum again the let them know that I had the escapee in custody and would be bringing him home. Some of the mechanics even got brave enough to touch him, once I was holding him. 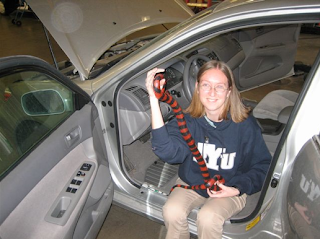 All in all it was quite the adventure. But it had a happy ending. Bandit is doing fine (once we got him warmed up), I have a great story, and the auto shop got a break from the norm that they will probably never forget.