On Saturday March 3, 33 couples arrived at the Bean Museum after hours to embark on a
dangerous quest . . . the quest for the crystal skull of Count Monte L. Bean! Cleopold
Reginald III, Madame Duvalt and Captain Reynolds led the explorers on their journey, who
had to collect the pieces of a map that lead to the treasure. The tomb raiders braved the
jungles of the island with Captain Reynolds and his first mate, showcasing their expertise
in shooting firearms. The Mystic certainly challenged our explorers with a puzzling maze
they had to complete before receiving her piece of the map. The Old Hag kept the tomb
raiders on their toes with her riddles, as well as by hiding a map piece on the island.
Madame Duvalt had a safe to crack, which the explorers had to discover the code for.
Cleopold Reginald III then assisted the explorers through a laser maze set up to protect the
crystal skull from thieves. All the while, the shadowguards roamed the island, capturing
explorers and sending them to frightening locations. Thankfully, everyone made it out alive,
and one couple discovered all 6 pieces of the map! Cleopold then led these two heroes to
the tomb of Count Monte L. Bean, where they discovered the crystal skull. Thank you to all
who dared join our journey, and we wish you luck on your future adventures. 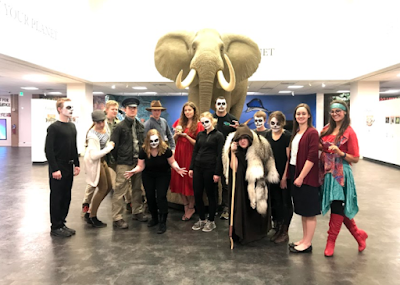 Each February, thousands of Snow Geese flock to Utah on their long trek home – roughly 3,000 miles! At the beginning of the month they leave their winter home in Mexico and make their way north, making a pit stop in Delta, UT where they will spend a few weeks resting up before the remainder of the journey towards their summer home in Canada. To celebrate this amazing migration, at 7 am Saturday morning the Bean Museum stuffed two twelve passenger vans full of people and equipment and took off towards Delta, excited to catch a glimpse of these migrant birds.  Led by Merrill Web, our group of birders began adding bird sightings to their list right out of the gate! Walkie-talkies connected the two vans, which allowed Dr. Webb to call out the species of birds being seen from the road the entire drive down to Delta. 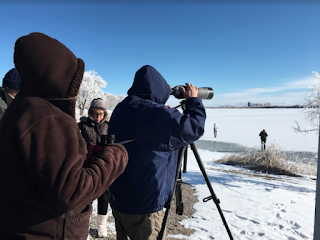 Upon our entrance to Delta, we were met with an amazing sight.  Flocks on flocks on flocks of geese crowding the skies above us!  Looking forward to finding the landing sites of these flocks, we strategized our search.  Our first stop was along the beach of the Gunnison Bend Reservoir. While most of the reservoir was frozen, there was a small flock of geese hanging out right in the middle of the reservoir.  Upon further inspection, this flock comprised of Canada Geese and one solitary Snow Goose! Anxious to find even more Snow Geese, we soon left the Gunnison Bend Reservoir in search of them and soon found them in the fields surrounding the reservoir. Dr. Webb taught the group how to tell the difference between a Snow Goose and a Ross’s Goose (its all in the bill) and with this newfound knowledge our group was able to start making sense of all the white feathers being seen in our scopes. 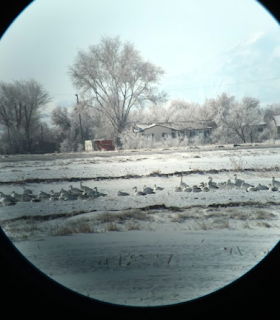 Once satisfied with the amount of geese seen, our caravan pressed on along a long stretch of road in hopes of seeing some hawks and eagles. With our eyes focused on the tops of telephone poles and in large trees, our hawk sightings were off the charts. While our hawk sightings were racking up, we had yet to find any eagles, and the time to head home was soon approaching. Although disappointed to be leaving Delta without seeing a single eagle, our caravan started to make the trek back to Provo.  As we started through the mountain pass that marked our exit out of Delta, there they were! Two Golden Eagles soaring high above us. A probable mated pair, we watched as the male showed off for the female by tucking in his wings and diving past her. We watched these two eagles dance through the air until they finally passed out of view, before finally heading back to Provo. 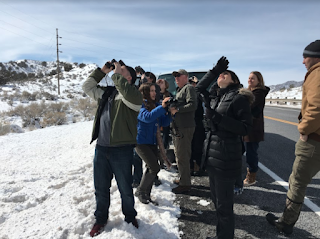 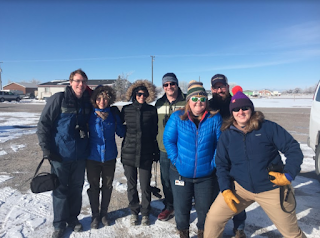 Posted by Bean Museum at 6:22 AM No comments: