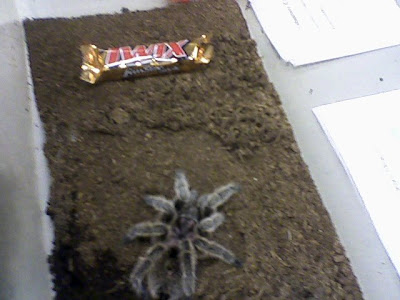 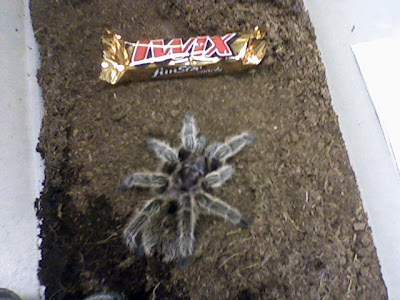 On Nov. 15th, Melissa and I went up to the Hogle Zoo to participate in their "Career Day at the Zoo" activities. We went prepared to talk about careers in taxidermy and museum education, but it ended up that the only people there to talk to us were between the ages of 5-9 and they wanted nothing to do with the knowledge of how to preserve dead animals. Melissa and I figured that we were in for a day of boredom. However, we noticed that all of the other booths at the career day had treats to give out to people that visited them. So, Melissa sent me out for candy in order to bribe people to come take a look at what the Bean Museum has to offer. I returned to the zoo with bags and bags of candy. Suddenly, there were hoards of kids willing to visit our booth. They would come over, take a quick look at the animals we had brought, grab candy, and get on their way.

This was all well and good, but we were up there to promote the museum and if we never got the opportunity to talk to anybody, we weren't doing any good. So, we had this GREAT idea to get people to come near us. Melissa slowly lifted the lid on Rosie's (the tarantula) cage and placed a candy bar in with her. Now, instead of people grabbing and go, they had to debate within themselves if a miniature Twix bar was worth possibly getting attacked by a rather cute tarantula. They would come over, see the tarantula, decide that there was NO WAY that they were going to go for it. However, since they had walked ALL the way over to our booth, they started to ask us questions. "Where is the Bean Museum?" "Is it free?" "What kind of activities do you have for 9 year olds?"

Finally, someone grabbed the candy bar! Once this little boy gathered up strength and reached into that cage, dozens of other children found their courage and followed in suit. Melissa decided that it needed to be harder, so soon the candy bar was actually UNDER Rosie. Many people decided that this was the scariest thing that they had ever been put up against and didn't dare go for it. However, since we had created this "game" our booth was the most popular at the career fair and we turned a potentially waste of a day into a productive Bean Life Science Museum promoting experience.

Charlotte Macfarlane
Museum Educator
Posted by beanwebmaster at 8:39 AM No comments: