There’s a new animal on display at the museum; some might even call it a new monster!  Its name is Titanoboa!  Titanoboa cerrejonensis was a massive snake as long as a school bus.  It lived fifty-eight million years ago in a swampy jungle in what is now Colombia.  By this time, dinosaurs had gone extinct and the region was covered in familiar-looking, albeit monster-sized plants and animals.  This snake looked a lot like a modern boa but acted a lot like a modern anaconda.  Boa constrictors can grow up to fourteen feet long, and anacondas can reach lengths of twenty feet, but nothing compares to Titanoboa at 42 feet long. That's a long snake!  Both boas and anacondas kill their prey by constricting - or squeezing - them to death.  Titanaboa was also likely a constrictor, however, it could grow over forty feet long and weighed more than a ton!  When constricting prey, it could exert 400 lbs of pressure per square inch.  It also had more teeth than either kind of snake previously talked about.  This might have helped it eat slippery fish even though it was large enough to chow down on alligators, dyrosaurids, and anything else that got in its way!  Next time you’re wandering through the Paleocene jungle, watch out for these slithery reptiles! 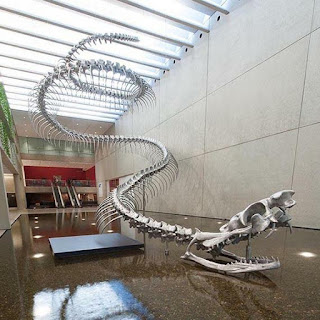 On December 16, 2017, the new Titanoboa exhibit will open at the Monte L. Bean Life Science museum.  The exhibit will feature a life-size replica of Titanoboa created by the Smithsonian; information about how this ancient snake was discovered in a Colombian coal mine; and interactive elements to help you learn about snakes.  You might even be able to pet a real life snake!  (One much friendlier than Titanoboa!)  Come learn about our slithery, scaly friends!" 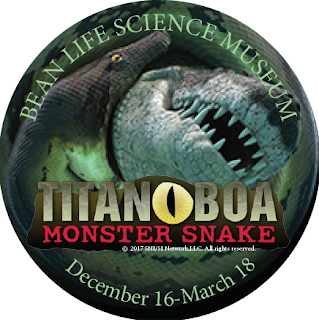 Also keep your eye out for our Titanoboa bus ad, slithering its way around Utah and Salt Lake County!

Posted by Unknown at 4:49 PM No comments: