During our final week of Critter Camp, we looked to the skies as we learned about air critters!

Our first day was spent at the museum learning about all the exciting creatures that navigate the air. Our friend, Belle the tarantula, helped us discuss ballooning in spiders and caterpillars--although she is too big, we learned that many other spiders can float through the air  on strands of silk.

Next, with the help of nature videos, we travelled to Indonesia to watch flying snakes and Draco lizards glide between the treetops. The Critter Camp explorers put gliding into practice with helicoptering maple seeds and their very own paper airplanes. 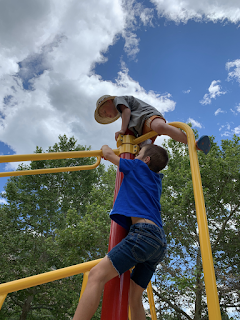 Finally, we learned about animals that use true flight to move. The campers learned about echolocation with a special game of Bat Tag, had an up-close look at exoskeletons and wings by examining insect specimens under a microscope, and handled real bird wings and feathers. All of us practiced flapping our “wings” to see if we could move as fast as flying animals--crow wingbeats weren’t so hard to keep up with, but hummingbirds and house flies were faster than any of us!


Our second day was spent exploring nature! We went to Hobble Creek where we saw dozens of air critters including birds, butterflies, and dragonflies. Our next stop was a trail near the Provo Airport Dike, where we found even more animals and even some floating seeds. Although it wasn’t a plant or animal, we were also excited to be there just in time to watch an airplane taking off.

After our hikes, the campers used a spotting scope to catch a glimpse of an osprey nest, and then played the rest of their wiggles out at Bicentennial Park. 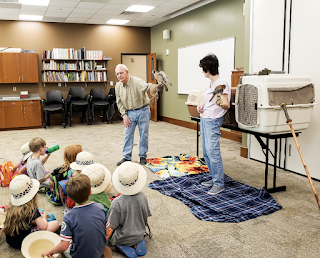 Our day ended with a special surprise! The Raptor Rehabilitation Center visited with several birds of prey and gave a great presentation. The campers were even able to touch a live owl! We are so grateful to the Raptor Center for teaching us all about their amazing birds. We were sad to say goodbye to all our campers, but had a blast this year! Thanks so much to everyone who helped and to all the participating campers and their families. We can’t wait for next summer!