On Monday, October 28th, the Monte L. Bean Museum welcomed people of all ages to come to participate in a Halloween family night. Young children, teenagers, and adults alike donned their Halloween best to enjoy a variety of activities and crafts. At the front doors, each guest was given a bingo sheet filled with things to do/find around the museum. These included finding various animals such as a bat, a wolf, and a leopard; finding pumpkins and skulls hidden in the exhibits; taking a picture at the photo booth; visiting the curiosity cart; doing the Halloween craft; taking a picture with a favorite animal; and watching the spooky live animal show. When they crossed off three items in a row on their bingo sheet, guests made their way to the top floor to spin the prize wheel for a chance to win a water bottle, bag, chapstick, pen, reusable straw, or their choice of one of our many biocards!

At the photo booth, guests had the opportunity to get their picture taken with one of our items from the education collection! They filled out a form so they could get their pictures sent to them as a reminder of the fun night they had. 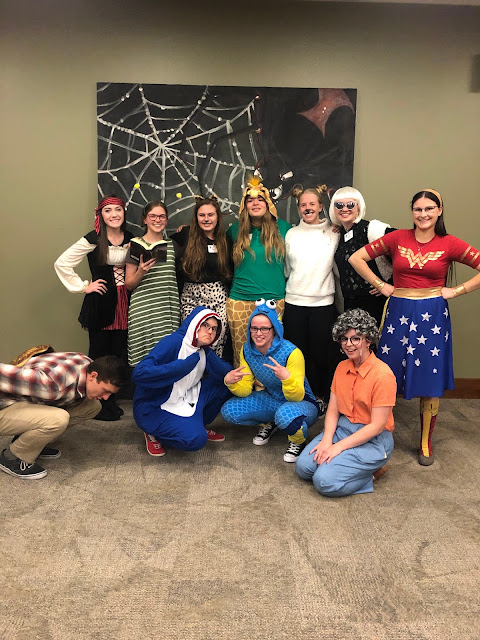 The Halloween curiosity cart was a hit with its array of spooky animals and other specimens. Guests were able to participate in hands-on learning about owls, ravens, vampire bats, spiders, and more.

Guests could then venture to the craft room and use their creativity to turn a black paper bag into a Halloween animal or monster.

One of the most thrilling parts of the night was the spooky live animal show! The audience was thoroughly entertained by a combination of amazing spooky animal facts and humor. Guests learned about animals such as the vampire bat and the horror frog and got to meet our less horrible pacman frog. They also met our fearsome/adorable bearded dragon, Mushu, and learned about many of the peculiar creatures that reside in the depths of the sea. They learned that a lot of animals that are conventionally scary are actually quite harmless and there’s nothing to be afraid of...even when a live tarantula gets loose in the auditorium!!

Overall, Halloween night was a success! A fun time was had by all, museum educators included. A night at the Bean Museum was a great way to kick off everyone’s Halloween celebrations. Until next year!